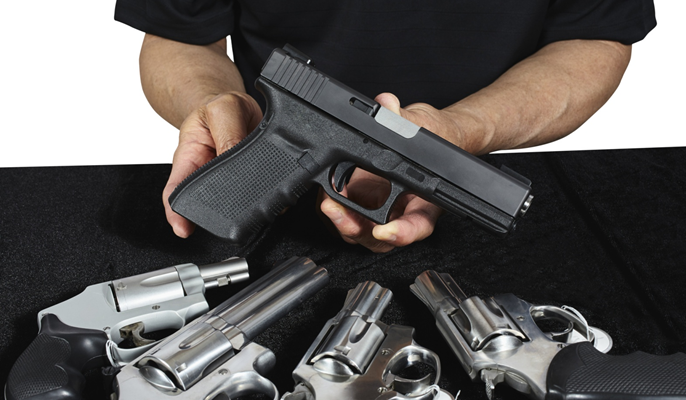 When it comes to gun ownership, the United States leads the world with an estimate of 200 million to 350 million weapons.

Guns have always been a popular topic for those in the southern states of America, but nowadays there seems to be even more of an interest in shooting guns. It is widely accepted that owning a gun is a fundamental right and protection against crime. They are also beautiful pieces of equipment as well as formidable weapons.

Whether you’re a trained expert or just someone who likes to shoot, it’s paramount to know the different types of guns that are available today. Study the regulations so you can be sure to stay within the law while shooting.

How Do Guns Work?

A gun is a device that launches one or more projectiles, often propelled by the action of an explosive force. Different types of guns work in different ways, but the three basic mechanisms are single-shot, semi-automatic, and fully automatic.

Guns work by using a chemical reaction to create an explosive force. This force propels the bullet or other projectile down the barrel of the gun and out the muzzle. The type of gun used determines how much force is generated.

How Many Types of Guns Exist?

Popular Types of Guns in 2022: Handguns

Handguns can be either single-shot or semi-automatic. Single-shot handguns must be manually reloaded after each shot, while semi-automatic handguns have a magazine that holds multiple bullets and reloads automatically.

It is a type of firearm that is shorter and lighter than a standard rifle. They are often used by military and law enforcement personnel who need a weapon that is more compact and easier to carry. Carbines are also popular with civilians who want a smaller gun for self-defense or hunting.

The carbine is a classic American rifle that was popular in World War II. As the war on terror continues, the firearms market has shifted to provide better-suited weapons for close-quarters combat and home defense.

A rifle is a gun with a long barrel for accuracy rather than speed. There are many types of guns in the world, but it is one of the most popular in the industry.

There are several types of rifles, and these are:

These are semi-automatic rifles that are often used by the military and law enforcement. AR-15 is a versatile and reliable weapon for a variety of purposes. Whether you are a hunter, target shooter, or simply looking for a weapon for self-defense, this type of gun is a great option.

To hold and protect the components of your rifle, you may use a high-quality AR15 upper. It is one of the gun essentials that a riffle owner should have.

Bolt-action rifles were first introduced in the 1800s. It is a firearm that uses a handle (usually attached to the butt of the gun) to operate a mechanism that withdraws the spent cartridge and inserts a fresh one. These are often used for hunting, as they are more accurate than most other types of firearms.

These rifles use a lever to cock the gun and load the next round. They are typically used for hunting and can be either manually or semi-automatically operated. These guns are designed to break open at the breech, making them easier to reload.

It is designed to fire a single round with each pull of the trigger and to automatically reload the chamber with the next round from a magazine. These have been around in the gun industry since the early 1900s, and they are one of the most popular on the market today. There are different types of semi-automatic rifles available, and they are popular with both recreational shooters and hunters.

Assault rifles are a type of rifle that is capable of fully automatic or semi-automatic fire. This means that the gun can fire a large number of rounds in a short period. Many people consider assault rifles to be the most dangerous type of gun because of their firepower.

These assault rifles are known for their accuracy, reliability, and firepower. They are often used in competition shooting and military and law enforcement applications.

Shotguns are popular for a variety of reasons. They are relatively easy to use and can be very effective for hunting or self-defense. These come in a variety of sizes and styles, so there is one to fit every need.

Just like rifles, there are multiple types of shotguns.

a. Pump-action shotguns are commonly used for hunting, target shooting, and home defense. These typically have a magazine capacity of 4-8 rounds, making them a good choice for situations where you might need to fire multiple rounds.

c. Break-action shotguns offer many benefits for both hunters and shooters and are available in a variety of different styles. These are easy to use for different applications.

A revolver is a repeating handgun that has a revolving cylinder containing multiple chambers and at least one barrel for firing. The term “revolver” refers to a particular type of firearm and not to the way the gun functions. Most revolvers are designed to use with one hand, as opposed to pistols, which often require two hands to stabilize the gun during firing.

There are many different types and sizes of revolvers, but they all share the same basic features. The most popular types of revolvers are five-shot and seven-shot.

Five-shot revolver is a revolver that holds five rounds in the cylinder. They are popular among shooters who want a small, lightweight revolver for concealed carry or self-defense.

Seven-shot revolver is a type of gun that usually has a cylinder that holds seven rounds of ammunition. They are popular for self-defense and target shooting. Some common revolver calibers are .38 Special, .357 Magnum, and .44 Magnum.

Machine guns are a type of gun that is capable of firing multiple rounds of ammunition in rapid succession. This type of gun is often used by the military and law enforcement officers.

These small, lightweight firearms are easy to carry and conceal, making them ideal for self-defense. Submachine guns are also popular among law enforcement and military personnel because they are easy to control in close-quarters combat. Some of the most popular submachine guns include Uzi, MP5, and MAC-10.

Advantages of Owning a Gun

There are numerous advantages of owning a gun. It gives you a sense of security. Knowing that you have a gun in your home, office or car can help you feel safe and protected.

This can give you a sense of empowerment where you are the one who’s in control of your safety and the safety of your loved ones. It gives you a sense of responsibility for everyone around you.

The Importance of Knowing the Different Types of Guns

In a world where guns are ubiquitous, it’s important to know the different types of guns and their capabilities. It’s not about knowing which gun is best for self-defense or hunting, but also about understanding how guns work and how they can be used to harm others.

Each type of gun has its unique benefits and drawbacks. No matter which type of gun you choose, it’s important to practice safety and learn how to use it properly. Guns can be dangerous weapons, but they can be beneficial.

Purchase One of the Most Popular Guns Now!

In conclusion, the types of guns that are popular in 2022 are those that are easily concealable and lightweight. This includes both traditional firearms and new innovative designs.  If you are interested in purchasing a gun, it is foremost to do your research and find the type that best suits your needs.

If you find this article helpful, keep on browsing for more blogs!